Between winter and summer 2018, extreme weather events caused a series of disruptions, delays and damages to the Chesapeake Bay Watershed. Of these, the most significant impacts to the region’ residents and businesses included: flooding; beach erosion; power outages; school cancellations; accidents and travel delays, such as road closures and suspended flights that led to increased transportation costs.1,2

In the Chesapeake Bay Watershed, the following extreme weather events occurred from February through August 2018: 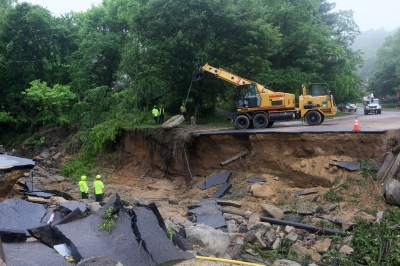 A crew works to repair a road destroyed by flooding on May 31, 2018 in Ellicott City, Maryland.

From February 10 to 12, 2018, heavy rain caused flooding and road closures in eastern Maryland. The largest storm total precipitation of 7.21 inches was reported at 6:00 a.m. on February 12 in Bay City, MD3. On June 22, Richmond, VA, observed its wettest June day and its second wettest day for any month on record, with 7.61 inches of precipitation in 24 hours4.

Due in part to heavy rain and flash flooding across the state, between May 21 and 22, three sinkholes appeared in Frederick, MD5, and another in Annapolis, MD, which closed part of Route 4506. On May 28, unrelenting rain led to serious flooding in Ellicott City, MD, where a flash flood emergency was issued by the National Weather Service as streets turned into raging rivers and communities were inundated.

On June 3, water levels rose by 4.4 feet in 24 hours in the Cacapon River in Morgan County, WV, prompting the governor to issue a state of emergency.7,8 Throughout June, persistent rainfall in northern and eastern Virginia delayed the planting of crops and flooded fields.9

During the month of July, Baltimore, MD received a record 16.73 inches of rain, which is 411 percent of normal precipitation.10 Williamsport, PA, Harrisburg, PA, and Dulles Airport, VA experienced their wettest July on record.11

The combination of sunshine and a strong flow of warm air from the south pushed temperatures into record territory12 for numerous sites across the watershed on February 20 and 21.13 High temperatures generally ranged from the low 60s to low 80s (°F), which was up to 40°F above normal. On February 21, Dulles Airport, VA recorded a high temperature of 82°F, the warmest February and winter temperature on record.

From July 1-4, high humidity along with unusually warm temperatures resulted in heat indices over 110°F in Maryland and Virginia, prompting Excessive Heat Warnings to be issued by the National Weather Service.14

On March 2, the first of several nor'easters15 impacted the region. Strong winds associated with the storm downed trees and power lines.16 A few days later on March 7, a nor'easter brought rain, heavy, wet snow, and strong winds.17 Flooded streets led to road closures. Another nor'easter moved through the region on March 13-14, bringing heavy, wet snow and strong winds. And then another storm on March 21 brought Washington, D.C.'s biggest snowfall of the year, which ranged from 4.1 to 7 inches across the greater metropolitan area. The March storms brought coastal flooding, beach erosion,18 power outages, numerous school cancellations, accidents and travel delays throughout much of the region. Disrupted travel led to increased trucking costs.19

On April 15, an Enhanced Fujita scale EF3 tornado was confirmed in the Elon community in Amherst County, VA. A severe rainfall event on May 15 brought intense downpours, which caused flooding, trapped people in cars, and road closures and issuance of a flash flood emergency in Frederick, MD. 20

An analysis of Summer 2018 temperature trends, compared to historical averages, indicates above-normal departures for most of the Chesapeake Bay watershed, including departures of 1-3°F in summer temperatures in the northern watershed.

The Atlantic hurricane season runs from June 1 through November 30, with a peak from mid-August to late October. The season has already experienced thirteen named storms, including Hurricanes Florence and Michael. 24

The U.S. Drought Monitor identifies areas of drought across the United States and categorizes them by level of intensity. As of September 6, 2018, the Drought Monitor indicates no drought for the Chesapeake Bay Watershed. North of the Chesapeake Bay, in New York, current conditions are abnormally dry, with portions of the region in moderate drought.

NOAA’s Climate Prediction Center, which monitors the likelihood of occurrence of El Niño and La Niña climate phenomena, has issued a El Niño Watch for fall and winter 2018. 25, 26 El Niño is a climate phenomenon characterized by a warming of the sea surface temperatures in the central and eastern tropical Pacific Ocean that leads to changes in weather across the globe. While this generally results in wetter winter weather, weather impacts to the Chesapeake Bay Watershed can be difficult to predict. The last marked El Niño took place in 2010 and caused significant winter snowfall in the Chesapeake Bay region, when nearly 77 inches of snow fell during the winter of 2009-2010.

The following figures are a unique regional analysis that provide detail on how the number days of extreme precipitation each year have changed over time (Figure 3a) and how they are expected to change in the future (Figure 3b). This information provides stakeholders, stormwater managers, urban planners and other decisionmakers with some guidance on how many extreme events can be expected. In areas where the number of extreme events is increasing, additional planning and actions may be needed to mitigate urban flooding and related damage.

This summary is the start of a series of climate summaries produced by MARISA for stakeholders, decisionmakers and water managers in the Chesapeake Bay watershed. For any questions or comments, please contact Krista Romita Grocholski at Krista_Romita_Grocholski@rand.org.