March 2020 ranked among the five warmest Marches on record for several sites in the Chesapeake Bay watershed including Baltimore, Maryland; Washington, D.C.; and Lynchburg, Norfolk, and Richmond, Virginia.1 March 20 and 29 were particularly warm in the southern portion of the watershed, with high temperatures reaching well over 80 °F in the warmest locations. Both days ranked among the ten hottest March days on record for Norfolk, Virginia, and March 29 was the fourth-hottest March day on record in Lynchburg, Virginia.2

In contrast with March, this April was the eighth-coldest on record for Binghamton, New York, and the fifteenth coldest April for the Washington Dulles International Airport in Virginia.3 In fact, Binghamton, New York, recorded its coldest highest maximum temperature for the month of April.4 Similarly, the highest temperature reached during April at Dulles International Airport was 78°F, the second-coldest highest maximum temperature for April on record.5 This marks only the fourth time on record that Dulles International Airport failed to reach 80°F in the month of April. Additionally, the highest maximum temperatures in Scranton, Harrisburg, and Williamsport, Pennsylvania, all ranked among their five coldest on record. Scranton and Williamsport also saw fewer days than usual in April with a high of at least 70°F (recording one day and two days, respectively)—making this April one of those with the fewest days that reached 70°F on record. 6

Just a few weeks later, the watershed experienced unusually mild temperatures from May 26–29. On May 26, high temperatures in the northern portions of the watershed were up to 20°F above normal, with the warmest locations reaching the upper 80s to low 90s.13 Scranton, Pennsylvania, tied its hottest May day on record at 93°F, while Binghamton, New York tied its third-hottest May day with a high of 88°F.14 Low temperatures on May 28–29 ranked among the five warmest on record for May in Richmond, Lynchburg, and Dulles International Airport, Virginia; and among the ten warmest on record for May in Baltimore, Maryland; and Williamsport, Pennsylvania.15 Despite the warm-up at the end of the month, this May still ranked among the twenty coldest on record for Richmond and Dulles International Airport, Virginia.16

A graphical representation of the temperature variability seen this spring at Dulles International Airport is shown in Figure 2, which appears and is discussed in more detail in Part 2.

This April ranked among the ten wettest on record for Washington, D.C.; Harrisburg, Pennsylvania; Dulles International Airport; and Lynchburg, Virginia. It was also among the twenty wettest Aprils for Williamsport, Pennsylvania; Baltimore and Hagerstown, Maryland; Richmond, Virginia; and Binghamton, New York.19

From May 18–22, a stalled storm system produced heavy rain and flooding in southwestern Virginia. Parts of Botetourt County received 6–8 inches of rain in this period and had several roads close due to flooding.20 Water levels on Craig Creek at Parr and Catawba Creek, near Catawba, both in Botetourt County, were among the ten highest on record.21,22 Some of the hardest-hit areas were just outside the Chesapeake Bay watershed. For example, the Roanoke, Virginia, area saw record-setting rainfall, and parts of the New River Valley experienced major flooding.23,24

A storm system impacted the region on April 7–9. During the late evening of April 7, two inches of hail accumulated on Interstate (I) 81 in August County, Virginia, contributing to several automobile accidents.25 On the morning of April 8, strong winds from thunderstorms snapped and downed numerous trees in West Virginia, Maryland, and northern and western Virginia, with some of the trees landing on houses and cars.26 Storm reports from this event indicate that a trailer collapsed after its roof was blown off in Harpers Ferry, West Virginia; shingles were torn from a house in Leesburg, Virginia; and a communications tower was damaged near Ingalls Field Airport, Virginia.27 This storm system also produced damaging non-thunderstorm wind gusts on April 9, blowing roofs from buildings in Dauphin County and Cumberland County in Pennsylvania.28

On April 13, a strengthening low-pressure system produced damaging winds across the watershed. Gusts of 40–60 miles per hour (mph) were common throughout the region, with some of the highest gusts reaching 75 mph in Moosic, Pennsylvania; 74 mph in Norfolk, Virginia; and 73 mph at a maritime station in Cape Henry, Virginia.29 This system also generated severe thunderstorms in portions of Pennsylvania, Delaware, Virginia, and Maryland, including two tornadoes—EF-0 and EF-1, respectively, on the Enhanced Fujita scale—that snapped trees and damaged homes in Caroline County and Carroll County in Maryland.30 The thunderstorm and non-thunderstorm winds associated with this system downed trees and wires, some of which fell on homes and cars, leaving thousands across the region without power.31,31 A strong wind gust even caused a tractor-trailer crash that left the cab dangling over the side of the High Rise Bridge on I-64 near Chesapeake, Virginia. The driver was rescued by members of the Chesapeake Fire Department after sustaining non-life-threatening injuries.33 Additionally, portions of central Maryland and central and western Virginia received more than 3 inches of rain, leading to road flooding.34 As a result, April 13 was one of the ten wettest April days on record for Dulles International Airport in Virginia and Washington, D.C.35 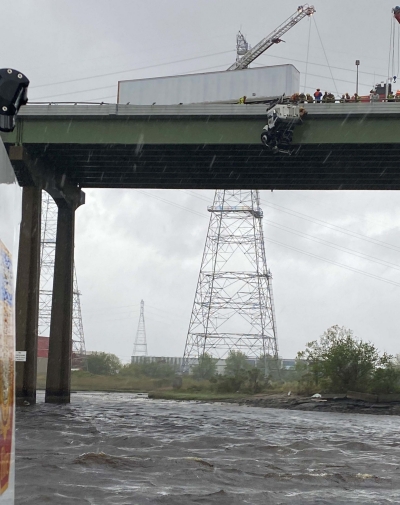 Chesapeake firefighter Justin Beazley rappels off the side of the I-64 Highrise Bridge to rescue the driver of a tractor-trailer hanging over the Elizabeth River.

Warmer temperatures throughout March contributed to below-normal snowfall for many areas. Scranton and Williamsport, Pennsylvania; Baltimore, Maryland; and Washington, D.C. all set or tied their records for the least snowfall in March. This March was also the first time on record with no measurable snow in Harrisburg, Pennsylvania.36 However, cool conditions returned in May, causing parts of the watershed to experience snowfall. For instance, Binghamton, New York, had its eight-snowiest days on record on May 8 and May 9, with 0.5 inches of snow on each day, helping the city have its sixth-snowiest May on record. 37

Generally, the Chesapeake Bay watershed saw below-normal snowfall this spring. Washington D.C.; Baltimore, Maryland; and Dulles International Airport all tied their records for least snowy spring, while Harrisburg, Pennsylvania, had its third-least snowy spring.38 It was only the third year on record that Washington, D.C., and Baltimore, Maryland, recorded no snow during the spring.39

According to the National Aeronautics and Space Administration (NASA), “…the data indicate that the nitrogen dioxide levels in March 2020 are about 30% lower on average across the region of the I-95 corridor from Washington, D.C. to Boston than when compared to the March mean of 2015–19.” 40 In fact, this spring, the Washington, D.C., area saw some of its best air quality in more than 20 years.41 Other areas, including Richmond, Virginia, also have noted an improvement in air quality.42 The lower levels of pollution this spring were attributed to the confluence of decades of environmental regulations; a wet, windy weather pattern; and a reduced number of vehicles on the road, because of stay-at-home orders that were in place throughout the region during the coronavirus disease 2019 outbreak.43

Figure 2 shows the spring season’s variability in daily average temperature departures from normal at the Washington Dulles International Airport in Virginia. While the average seasonal temperature for the region was near normal, the daily temperatures showed large departures for normal. Overall, this spring ranked as one of the top 20 warmest on record at Dulles International Airport, Virginia, despite the lower than normal temperatures recorded in April and May. 45

More information on how recent precipitation and temperature compares to historical trends for the East Coast, including the Mid-Atlantic region, can be found using the Southeast Regional Climate Center’s Climate Perspectives tool.46

The weather conditions from this season, along with their impacts, are discussed in Part 1.

The United States Seasonal Drought Outlook identifies how drought might change across the United States and categorizes areas by whether drought could develop or become more or less intense. As of May 21, 2020, the outlook indicates no tendency toward drought for the Mid-Atlantic region.48 The Mid-Atlantic has experienced severe to extreme droughts in the past, most notably in the mid-1980s, the late 1990s, and the 2000s.49

The Mid-Atlantic Regional Integrated Sciences and Assessments (MARISA) Seasonal Climate Impacts Summary and Outlook is a quarterly series produced by the MARISA program, a collaboration funded by NOAA through the RAND Corporation and researchers at Pennsylvania State University, Johns Hopkins University, Cornell University, and the Virginia Institute of Marine Science. This series draws information from regional climate centers, news and weather information, and regional-specific climate datasets for the benefit of policymakers, practitioners, residents, and community leaders in the Mid-Atlantic region. Projections of weather and climate variability and change in the Mid-Atlantic region come from the best available scientific information. For any questions or comments, please contact Krista Romita Grocholski at Krista_Romita_Grocholski@rand.org.