Even though the center of Hurricane Dorian never made landfall in the region, the storm's outer bands impacted the eastern parts of Maryland and Virginia from September 5–7.1 Hurricane-force wind gusts of up to 83 mph were recorded at the Chesapeake Light Tower, which is approximately 1000 feet off the beach and 13 miles from the coast of Virginia Beach.2 Tropical storm force wind gusts of up to 70 mph downed trees, knocked down power poles, and caused roof damage, particularly in the Hampton Roads region of Virginia.3 Tidal flooding occurred along the Chesapeake Bay and its tributaries, with major flood stages of 6 ft and 5.5 ft surpassed at the Chesapeake Bay Bridge Tunnel and Kiptopeke, Virginia, respectively.4 The flooding led to closed roads and stranded vehicles.5 Hurricane Dorian contributed to additional moderate to heavy rainfall in the Hampton Roads region and on Maryland's Eastern Shore, with the greatest storm totals approaching 4 inches.6 As a result, multiple school districts and universities cancelled classes, and government offices were closed.7

In the month of October, several storms brought much-needed rain to the region, resulting in the ninth wettest October for Washington, D.C. on record.8 This precipitation eased drought conditions across much of the watershed, supporting crop growth and pastures, allowing burn bans to be lifted, and improving water levels on area waterways.9,10

A strong storm stalled off the East Coast from October 8 through 12, resulting in persistent northerly winds that created elevated water levels, which in combination with high waves, caused tidal flooding in the Chesapeake Bay and along its tributaries.11 Most locations experienced minor or moderate flooding, but several sites along Virginia’s Northern Neck and Maryland’s Eastern Shore experienced major flooding.12 Preliminary data showed the tide height measured at Chesapeake Bay at Cambridge, Maryland reached 4.68 feet on October 12, which ranks as the fourth highest water level since 1980 (3.5 feet is considered flood stage, and 4.5 feet is considered a major flood stage).13 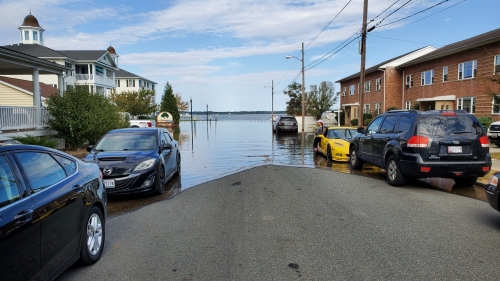 A few days later, from October 16 to 17, a rapidly strengthening coastal storm brought up to 2 inches of rain and wind gusts of up to 57 mph to the watershed, causing areas along the Chesapeake Bay once again to experience tidal flooding.14,15

A line of severe thunderstorms blasted through the region on October 31. Storm reports indicated that two tornadoes, an EF-0 and an EF-1, caused damage in Chesapeake, Virginia, and strong winds knocked down trees and wires in many locations within the watershed.17 The storms contributed to numerous power outages, as well as two deaths.18 Heavy rain accompanied the storms and caused flooding in several locations. For example, flooding led to the closure of Interstate 83 in central Pennsylvania, and several cars were stranded in floodwaters in Baltimore.19,20

A low pressure system made its way up the East Coast from November 16 to 18. Fog and freezing drizzle in Virginia’s Shenandoah Valley, particularly at higher elevations, created icy roads that contributed to a bus crash on Interstate 64 that sent at least 20 people to the hospital.21, The storm combined with high tide that occurred simultaneously resulted in coastal flooding.22,23,24,25

On November 27 and 28, wind gusts of up to 68 mph downed trees and powerlines in the southern parts of the Chesapeake Bay watershed causing minor disruptions to Thanksgiving travel due to power outages, closed roads, and flight delays. 26,27,28 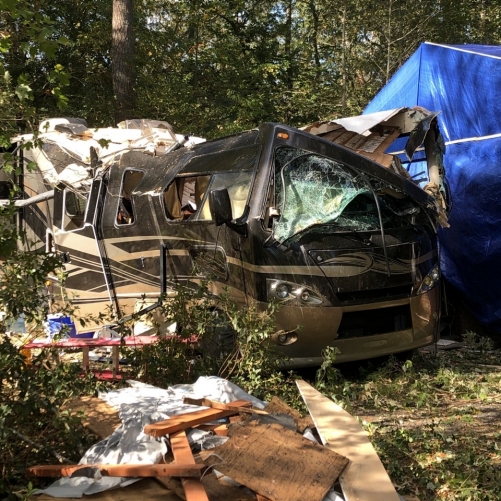 Damage caused by a tornado in the City of Chespeake, Virginia, on October 31.

This hot, dry weather led to moderate and severe drought in Virginia, Maryland, Delaware, a small portion of West Virginia's Eastern Panhandle, and south-central Pennsylvania.39 The last moderate to severe drought conditions in the region occurred in Maryland and Virginia in January-February 2018.40 Part 3 of this climate summary describes anticipated drought conditions for Winter 2019-2020.

Drought conditions had a severe effect on agriculture. In late September, the topsoil was considered dry or very dry in all of Delaware, 99% of Maryland, and 88% of Virginia, and pasture conditions were rated poor or very poor for 74% of Virginia.41,42 Planting of fall crops was also delayed in Caroline and King George counties in Virginia and Sussex County in Delaware, and some crops were slow to emerge in Frederick, Howard and Montgomery Counties in Maryland. 43,44 Dry conditions contributed to lower soybean yields in parts of Delaware and Maryland but allowed for a quick corn harvest in Maryland.45,46 Botetourt County, Virginia was one of several counties in Virginia to declare a disaster because of the drought, potentially making farmers eligible for government assistance.47

Drought increased the risk of wildfires in the region. Burn bans were enacted in all 55 West Virginia counties, at least 24 Virginia counties, and along Maryland’s Eastern Shore, with Wicomico County issuing its first burn ban since 2012.48 A brush fire at Jefferson National Forest in Virginia shut down a ten-mile section of the Appalachian Trail and another fire in Bedford County, Virginia took almost a week to for firefighters to extinguish.49,50 Two fields in Baltimore County, Maryland caught fire.51

The dry conditions affected fall foliage in some areas, with muted colors and drought-stressed leaves falling earlier by a month or more in western Virginia.52 Peak fall foliage generally occurs in mid-October in this region.

During the drought, water levels on rivers, streams, and other waterways fell to below-normal levels.53 Little rainfall and warm temperatures contributed to a large algae bloom on the James River in Virginia in September and early October, which is unusual, as blooms normally peak during the summer months.54

Figure 2 shows the fall season’s variability in daily average temperature departures from normal at the Washington Dulles Airport in Virginia. While the average seasonal temperature for the region was near normal, the daily temperatures showed large departures for normal. In the case of Dulles Airport, this location saw record highs and lows throughout the season.

From September 1 through November 30, 2019, precipitation departures from normal, seen in Figure 3, show that the majority of the Chesapeake Bay watershed experienced less precipitation than historical averages, with several areas experiencing only 50–75% of their normal precipitation for the period. As recently as October 15, the U.S. Drought Monitor indicated areas of severe and moderate drought in Maryland, Delaware, and Virginia. 55 These areas of drought have since improved, due to recent rainfall events, and as of November 27, only central southern Virginia was experiencing moderate drought, with the rest of the region experiencing, at worst, abnormally dry conditions.56

For more data on historical trends and future projections of seasonal precipitation, see Part 4 of the Winter 2018-2019 Climate Summary. More information on how recent precipitation and temperature compares to historical trends for the East Coast, including the Mid-Atlantic region, can be found using the Southeast Regional Climate Center’s Climate Perspectives tool.57

As of November 21, 2019, NOAA's Climate Prediction Center forecasted a 33–40% chance of above normal precipitation for December 2019 – February 2020 in the Mid-Atlantic region.58 They showed a 33-40% chance of temperatures above normal for the Chesapeake Bay Watershed.

The U.S. Seasonal Drought Outlook predicts how drought may change across the United States, categorizing areas by whether drought could develop or become more or less intense. As of November 21, 2019, the outlook indicated removal of drought conditions for Southern Virginia.59 The Chesapeake Bay region has experienced severe to extreme droughts in the past, most notably in the mid-1980s, the late 1990s and the 2000s.60

NOAA's Climate Prediction Center, which monitors the likelihood of occurrence of El Niño and La Niña climate phenomena, had no alerts or warnings active as of December 3, 2019, and predicted neutral conditions in the Pacific Ocean, rather than either El Niño or La Niña.61 In the absence of these two phenomena, other climate patterns such as the Arctic Oscillation (AO) can play an important role in winter weather.62 The AO, which characterizes atmospheric circulation patterns over northern portions of the Northern Hemisphere, has two phases—negative and positive. When the AO is negative, the Northeastern United States is more likely to experience Nor’easters and outbreaks of polar air.63

Part 4: Hurricanes and Tropical Storms in a Changing Climate

Recent increases in hurricane intensity are partially linked to rising sea surface temperatures in the regions where North Atlantic hurricanes form.64 For over a decade, research has shown that hurricane activity, including changes in their frequency, along the U.S. Atlantic coast is sensitive to warm sea surface temperatures, by shifting storm tracks and changing the formation of hurricanes and tropical storms.65,66,67

This section details the historical trends in the frequency, magnitude and impact of hurricanes and tropical storms, as well as provides an overview of how scientists expect these storms to change under future climate.

The MARISA Seasonal Climate Impacts Summary and Outlook is a quarterly series produced by the Mid-Atlantic Regional Integrated Sciences and Assessments (MARISA) program, a collaboration funded by NOAA through RAND and researchers at Pennsylvania State University, Johns Hopkins University, Cornell University, and the Virginia Institute of Marine Science. This series draws information from regional climate centers, news and weather information, and regional-specific climate datasets for the benefit of policymakers, practitioners, residents, and community leaders in the Chesapeake Bay Watershed. Projections of weather and climate variability and change in the Chesapeake Bay Watershed come from the best available scientific information. For any questions or comments, please contact Krista Romita Grocholski at Krista_Romita_Grocholski@rand.org.