Several flash flooding incidents occurred between late June and early July. On June 29-30, parts of western Maryland and eastern West Virginia received up to 5 inches of rain, the majority of which fell in just a few hours.1 Due to the intensity of precipitation, Baltimore-Washington National Weather Service issued a rare Flash Flood Emergency for a portion of Grant County, WV.2 This included the town of Bayard, WV, which recorded 4.71 inches of rain, making June 30 the site’s second wettest day since records began in 1902.3

On July 8, another significant flash flood event occurred, which affected portions of Maryland, Virginia, and West Virginia. Ronald Reagan Washington National Airport near Washington D.C. received 3.30 inches of rain (nearly an entire average July’s worth of rain) in an hour, 4 which ranks as the greatest one-hour rainfall total for the district since at least 1948.5 For the D.C. area, rainfall events of this magnitude have a 1% chance of happening in a given year.6 The largest 24-hour rainfall totals that occurred during this flash flood event across Maryland, Virginia, and West Virginia approached 5 inches.7

During the July 8 event, the Baltimore-Washington National Weather Service declared its second Flash Flood Emergency for the season.8 This was the first Flash Flood Emergency declared for the D.C. metropolitan area since the National Weather Service created the designation in 2011.9 Waterways rose quickly during the heavy rain. Data show that both Four Mile Run in Arlington, VA, and Cameron Run in Alexandria, VA, rose more than 11 feet in an hour.10 Floodwaters stranded morning commuters, inundated portions of public transportation routes, and resulted in several water rescues.11

On August 6, around 4 inches of rain fell in an hour in Baltimore, MD, flooding roads and vehicles.12 This was a 500-year storm event, which means that this intensity and duration of rainfall has a 0.2% chance of occurring in a given year.13 The following day, on August 7, Norfolk, VA received 2 inches of rain in 31 minutes, which caused some roads to become impassable due to flooding.14 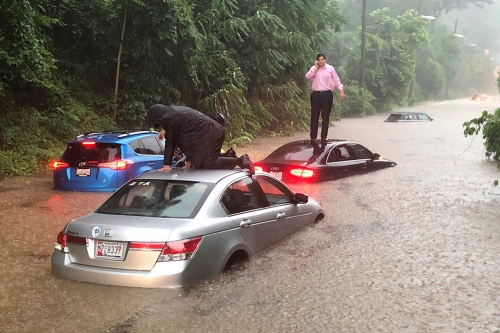 Motorists are stranded on a flooded section of Canal Road in Washington, D.C. during a heavy rainstorm, Monday, July 8, 2019.

The Chesapeake Bay region experienced a series of record setting heat waves this summer. The most intense of these heat waves of was from July 19 to 21. The National Weather Service issued Excessive Heat Warnings and Heat Advisories for much of the region during this time period. Daily high temperatures reached 100°F; and when combined with high humidity levels, the heat index reached 110°F in some areas.15 In addition, daily low temperatures were also unusually warm. On July 20, Washington, D.C., had a low of 81°F, which ranked as the city’s 10th warmest daily low temperature for July on record (since 1872). In Harrisburg, PA, a daily low of 79°F tied for the city’s eighth all-time warmest minimum temperature on record (since 1888).16

Despite the unusually active spring months for severe weather and tornadoes, the summer tornado count was below average. In fact, there was only one tornado in the watershed: an EF-1 in northern Maryland on June 13.22 In June and July, severe thunderstorms, some of which carried wind gusts of up to 81 mph and hail as large as 2 inches, downed numerous trees and wires, as well as damaged several buildings in Central Pennsylvania.23

An analysis of Summer 2019 average temperature, shown in Figure 1, compared to the climate normal, defined as the average temperature from 1981 to 2010, indicates above-average departures from normal temperature for most of the Chesapeake Bay watershed. Of these, some of the greatest departures from normal (at least 3°F) were seen in the greater Baltimore metropolitan region and in eastern Maryland. This summer ranks among the top 10 warmest summers on record for Baltimore, MD; Harrisburg, PA; Dulles Airport, VA; and Washington, D.C.24 For more data on long-term trends in temperature, see Part 4, below.

As of August 15, 2019, NOAA’s Climate Prediction Center forecasts for a 33–50% chance of precipitation above normal for September-November 2019 in the central and southern Mid-Atlantic region.26 They show a 40-60% chance of temperatures above normal for the majority of the Chesapeake Bay Watershed. For more information on long-term trends and averages in high temperature, see Part 4, below.

The U.S. Seasonal Drought Outlook predicts how drought may change across the United States, categorizing areas by whether drought could develop or become more or less intense. As of August 15, 2019, the outlook indicates no likelihood of drought for the Chesapeake Bay Watershed.27 The Chesapeake Bay region has experienced severe to extreme droughts in the past, most notably in the mid-1980s, the late 1990s and the 2000s.28

NOAA’s Climate Prediction Center, which issues a hurricane outlook for the Atlantic throughout the hurricane season, is forecasting the season to be above normal with 10-17 named storms, 5–9 hurricanes and 2–4 major hurricanes.29 Researchers at Colorado State University (CSU) have predicted a near average 2019 hurricane season in the Atlantic. As of August 5, 2019, CSU’s total seasonal forecast calls for 14 named storms and 7 hurricanes for 2019, with a 53 percent chance of at least one major hurricane (category 3–5) making landfall on the eastern U.S. coastline.30

The following interactive figure provides detail on how annual extreme high temperature could change into the future (Figure 3).

The MARISA Seasonal Climate Impacts Summary and Outlook is a quarterly series produced by the Mid-Atlantic Regional Integrated Sciences and Assessments (MARISA) program, a collaboration funded by NOAA through RAND and researchers at Pennsylvania State University, Johns Hopkins University, Cornell University, and the Virginia Institute of Marine Science. This series draws information from regional climate centers, news and weather information, and regional-specific climate datasets for the benefit of policymakers, practitioners, residents, and community leaders in the Chesapeake Bay Watershed. Projections of weather and climate variability and change in the Chesapeake Bay Watershed come from the best available scientific information. For any questions or comments, please contact Krista Romita Grocholski at Krista_Romita_Grocholski@rand.org.